The temperatures are getting cooler, the days getting shorter, and the leaves are starting to change color. It’s almost time for lambing season, right? Say what? That’s right; fall lambing season is just around the corner!

Why do we fall lamb?

Some producers choose to lamb in the fall in order to reach a different final market than traditional lambing crops. Often fall born lambs are worth more because the supply is much decreased when they are marketed. Some fall born lambs will go on to be show lambs for early summer shows and some will be marketed for spring holidays like Easter.

What is special about fall lambing? 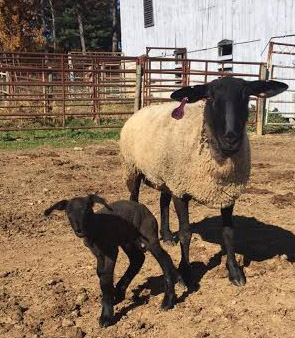 How do we get ewes to breed out of their normal breeding season?

In order to get sheep to breed out of season, we have to select for white-faced ewes who are naturally more likely to breed in the fall, alter natural light, or administer exogenous hormones to get them cycling. In addition to hormones, producers should increase the nutritional plane of the ewes to encourage cycling and fertility. This involves feeding a high energy feed like corn at 1-2lbs/head/day. The out of season breeding protocols are similar to cattle estrous synchronization protocols and include use of a sheep CIDR, PMSG and prostaglandin. One common protocol involves administration of PMSG and a 14 day CIDR, and then giving a shot of Lutalyse when the CIDR is pulled. Rams can go in with the flock 2 days later.

What should we do to prepare the ram?

Like the ewes, rams need an increase in energy intake in order to be fertile. Feed should be increased for rams about 8 weeks before they are expected to breed. Shearing the rams to keep them cooler and keeping a fan on them will also increase fertility out of season. Finally, it is important to note that rams will not be able to cover as many ewes out of season as during the normal breeding season. Rams should be expected to breed 5-10 ewes during out of season breeding.

Overall, it does take some extra work to have fall lambs, but the baby lambs jumping through fall leaves make it worth it!