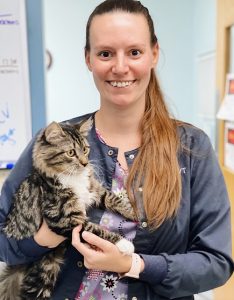 Erin has had a variety of pets growing up. When she was six years old, she asked Santa for a snake. Much to her delight, Monty-the-snake was waiting there for her under the tree! She has been a client of Compassion Animal Hospital since 1990, after moving to Virginia from New Jersey. In 2005, Erin graduated from Liberty High School. Before attending BRCC, she initially went to school to become a Medical Transcriptionist. However, during her internship at Compassion Animal Hospital, she quickly discovered her true calling. In 2009, Erin began working at Compassion Animal Hospital as a Veterinary Assistant, and continued throughout her schooling.

Erin is currently living in Bealeton with her nine cats (Groucho, Big Boy, Princess, Runt, Rolly, Rascal, Tigger, Salem, Patches and Monty). In her free time, Erin enjoys painting pottery, playing sports, reading books, and most of all relaxing on the beach!